I always wanted to be a writer. I wrote my first poem and my first short story when I was in first grade. The story itself has been lost, but I do remember that it was about Frog and Toad (characters originally created by Arnold Lobel) going to the movies and seeing Star Wars. I believe the throwing of popcorn may have been an important subplot. No written copies of the poem remain, but I did memorize it.

There was an old man named Jake
Who wanted to bake a cake.
He put in the flour
But found the milk sour
So instead a pie he did make.

What do you want? I was six years old and we were learning about limericks.

Throughout elementary school I always looked forward to the writing assignments, especially creative ones. It didn’t occur to me until I began seventh grade that I could write things just because I wanted to, and not because they were assigned. I began carrying around a journal, in which I captured poems and short stories whenever I felt inspired, which was usually in the middle of a class (math and social studies both proved to be particularly inspiring). I also began to write plays, either in collaboration or competition with some friends, and I found myself trying to carve space out of my after school life of part-time work, babysitting, homework, friends, pleasure reading, and television. My mother gave me her old typewriter, and I could frequently be heard in my room clacking away on it, working on plays, screenplays, or random scenes from stories set in a grim, apocalyptic future. I finished two of the plays (one in collaboration with two friends, one by myself), and the rest has been languishing in faded folders ever since.

In high school I began to write a novel, quite by accident. My freshman year English teacher told us to write a story correctly using the words ‘they’re,’ ‘there,’ and ‘their,’ as well as ‘you’re’ and ‘your.’ Rather than do the usual cram-all-the-words-as-close-together-as-possible-and-be-done-with-it trick, I decided to just write a story and keep going until the words worked their way in naturally. They were all pretty common words, after all. After four or five pages the necessary words were present and accounted for, but the story was nowhere near finished. I wrote ‘To Be Continued’ at the bottom and handed it in. My teacher loved it.

A few weeks later I missed the weekly vocabulary test for a completely legitimate but unremembered reason. My teacher’s policy was that anyone who missed a vocabulary test couldn’t just make it up another day; instead they had to write a short story using ten of the twenty vocabulary words. I was happy to comply, and continued my ‘They’re There and Their’ story until ten of that week’s vocabulary words found a place within. I turned it in, again ‘To Be Continued.’ My teacher gave me a high grade and noted that she couldn’t wait to read what happened next. Neither could I.

I spoke with her after class, and we agreed that I could skip the weekly vocabulary tests and just hand in a new installment of my story each week instead, as long as I used at least ten of that week’s words. And just like that, I was writing a novel.

But it takes a lot more time to write an installment of a novel than to memorize twenty vaguely familiar words and their definitions, and for the first time I found myself truly struggling to carve out time and space to write. I had study hall three times a week, but a room full of teenagers trying not to be bored and seeing how much goofing off they could accomplish without being noticed by the teacher was not very conducive to writing. Instead I got permission to park myself at an empty computer in a corner of the computer lab and use the word processing program while the computer teacher conducted his small class on the far side of the room.

Those forty-six minutes a day, three days a week, were wonderful. As soon as I sat down the words began to flow, and they kept flowing until the bell rang. I still wrote the odd poem or short story during a boring math or social studies class, (one geometry class inspired a poem entitled “Rainbow in the Football Field” which I don’t intend to ever let anyone see) but that computer in the back corner of the lab, next to the window that looked into the library, that was my writing space. That’s where I became a writer.

I didn’t finish the novel by the end of freshman year. Nor did I write very much over the summer. In the fall, however, I made the same agreement with the computer teacher, and I spent all three of my assigned study halls in that lab, writing my novel. The only difference from freshman year was that I no longer had a list of vocabulary words I had to work into the story.

In February of my junior year I was in a car accident, which resulted in my missing school for six weeks. When I returned I was permanently exempted from gym class, so my study halls went from three to five each week. At least something good came from that crash.

I finished the novel early in my senior year, again quite by accident. I finished typing a paragraph, and realized that I’d just tied up my last loose end. I was done. I typed ‘The End’ at the bottom, and then noticed I was hyperventilating. Without a hall pass, I left the computer lab and walked laps of the school building until the next period began. I still remember the adrenaline rushing through my body and the feeling of weightlessness as I wrapped my head around the fact that my story was something entirely outside myself now. The next day in the computer lab I sat down to a blank screen and froze. I had no idea what to write, so I began typing up some of the poems and stories I’d written longhand in my journal. It didn’t feel right, though, and I was restless.

A few weeks later I started a new novel, again as a result of an assignment in English class.

Work on that novel faltered, however, when I graduated from high school and went to college. There was a computer lab at college, but I didn’t have the dedicated forty-six minutes three to five days a week when I had to be there. I went once or twice, but that was it. When I dropped out of college and had to work two jobs just to pay my bills, I stopped writing altogether. Several years later, when I finally had a decent computer I could write with at home, I realized I no longer wanted to write that novel. It was too adolescent, and I had nothing to take its place.

I joined Facebook in 2007, and was embarrassed when so many people I haven’t seen since high school friended me and asked if I was still writing. I hadn’t realized how much my writing had defined me back then, but apparently it had. I highlighted all the professional writing I’d done in my work as a pastor, but no one was impressed. To be honest, I wasn’t that impressed, either.

During my years as a pastor I wrote plenty of sermons and newsletter articles, but I didn’t do much writing for myself. I wrote a few reflective essays in the journal I still kept in my purse, but that was it. I didn’t really begin creative writing again until 2011. By then I was a thirty-eight-year-old stay-at-home mom with two small children. I had another novel in mind, but I kept my writing focused on biblical devotions and blog posts. At least I was writing again.

A year later, in 2012, I began to write that novel. Since then my blogs have ebbed and flowed, my devotions have lurched forward and stalled out, lurched forward and stalled again, and my novel has gone months at a time without being touched. But in the last year the novel has been pushing its way forward. I’m able to carve out thirty minutes to an hour most days to work on it. The screens on our back deck had to be replaced after last winter’s harsh weather, and now that deck is known as Mama’s Room. I get up early in the morning and sit in Mama’s Room with my coffee and my laptop, and I write before the kids get up. The words come easily most mornings. That deck serves as my writing space the way the back corner of my high school computer lab did. I’m a writer out there. I have a small, lightweight MacBook Air that I can take anywhere, so I work on it while the kids are at Taekwondo or during the Sunday School hour at church. I’m a writer in both those places, too. 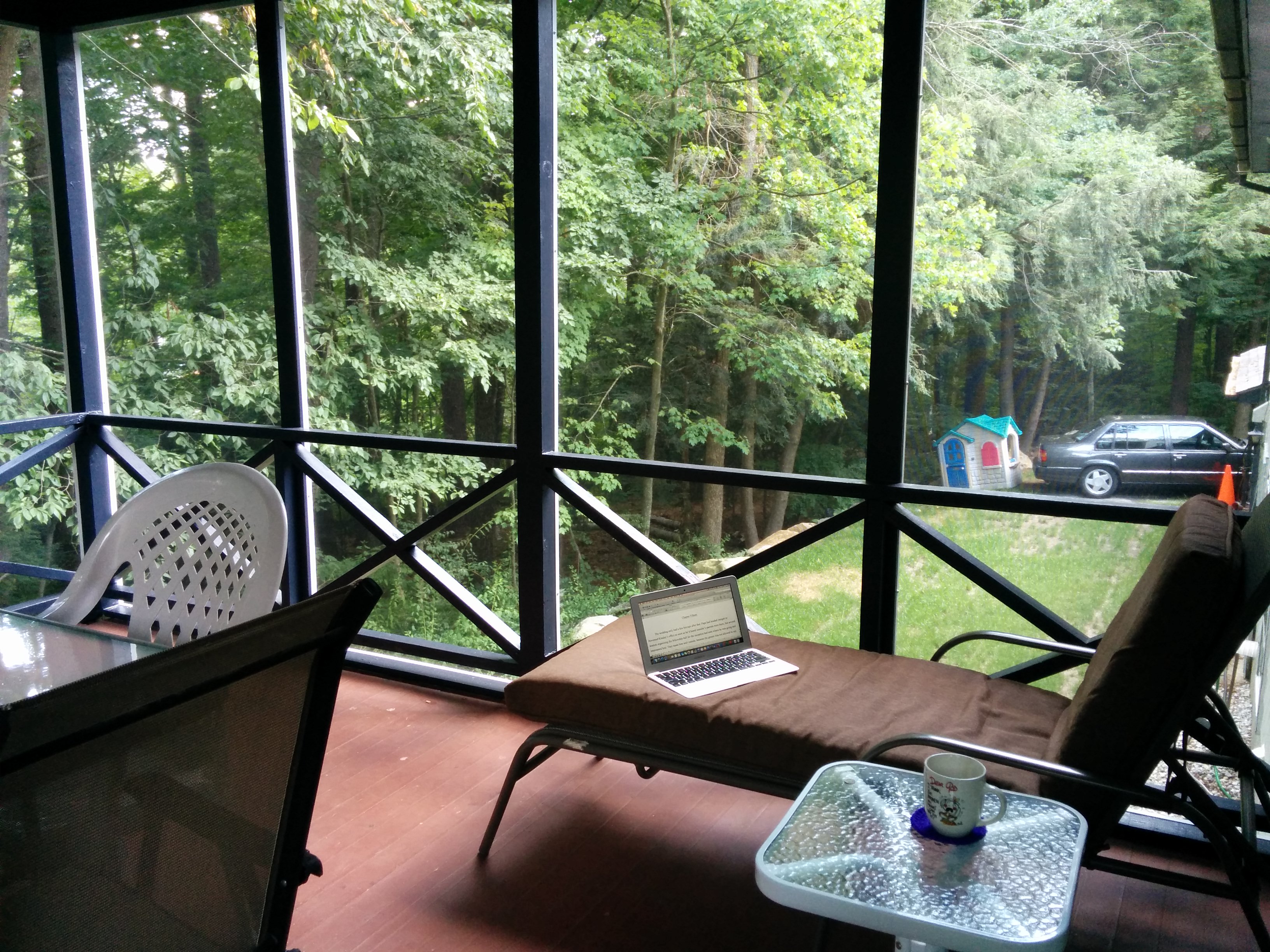 When I was a kid I said I wanted to be a writer. I did quite a bit of writing, and sometimes I actually felt like one. I didn’t realize that I was one already. But for many years of my adulthood I wasn’t a writer. How could I be? A writer writes, and I didn’t write. But I write now, and even though I’ve not had much published, I confidently identify myself as a writer.

And I can’t wait to share my novel with you!

Do you have a time or a place that helps you to write? How have you evolved as a writer? I’d love to hear about it in the comments!

Revolutionary Mothers: Women in the Struggle for America's Independence
by Carol Berkin
This book gives tantalizing glimpses into the lives of women from all walks of life who showed tremendous courage and fortitude in the most difficult of situations. The narrative of the Revolutionary War is so familiar, yet this book rev...

Mistress of the Solstice
by Anna Kashina

Have you checked out my book yet?