And it was logical…to a completely inexperienced Dungeon Master.

Problems with Writing a Novel While Running a D&D Adventure

The first problem I encountered was the fact that I was a completely inexperienced Dungeon Master. I had to learn everything from the basic rules of the game to how to run an adventure.

The second problem I encountered was the fact that most of my players were just as inexperienced as I was, and I had to guide them more than is typical for a DM. This was, after all, a homeschool study group, and I was the study group leader as well as DM. I was, by design, teaching the game in addition to leading the adventure. This took up a lot more time than I realized.

I watched a lot of YouTube when learning how to play and, more specifically, how to run an adventure. There I stumbled across Mark Hulmes, host of the High Rollers D&D and Tabletop Weekly YouTube Channels. In addition to his excellent tutorial series on how to fill out a character sheet, he also had a series called DM 101, which is a crash course on how to be a Dungeon Master.

In one of those episodes Hulmes made the valid point that DMs who try to use their adventures to write a novel will invariably become frustrated when their characters don’t behave in accordance with the DM’s vision. He said, “If you want to write a novel, just write a novel.” It’s a valid point, which I took to heart. And to be honest, I didn’t have the time to be developing a novel in the middle of all this learning and teaching anyway. 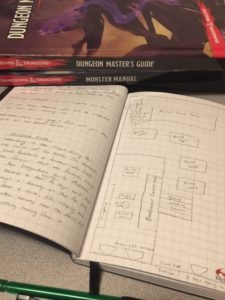 That’s not to say I didn’t do any D&D inspired writing. I took care to write detailed descriptions of my characters’ surroundings, and I enjoyed specifying exactly what happened in their combat encounters. At one point my players were battling a Black Pudding Ooze while completely blind in a magical mist. When one character tried to throw a small stone at it and rolled extremely low on her attack, I described how she’d lost her bearings and threw the rock in the wrong direction entirely. Another player tried to hurl a larger boulder at the creature, but a previous minor injury from a fall caused his knee to buckle at the wrong time, and he dropped the rock on his own foot. Everyone loved that one.

I also wrote a lot of lore and history that made up the world I’d created. And that’s where I found the real value in DM-ing as a writing exercise. The ultimate purpose of running an adventure is enabling your players to have fun. As characters, they’re going to do what they’re going to do and it’s the DM’s job to create an adventure they’ll enjoy. But they’ll need a world in which to have that adventure, and worldbuilding involves ample opportunities for creative writing. Sure, there are plenty of worlds already written and available for Dungeon Masters to use; you don’t have to create a new world from scratch every time (or ever, for that matter). But that’s not my style.

So How Does My D&D Inspired Writing Help Me Grow as a Writer?

I’ve never written fantasy or speculative fiction before; all of my fiction takes place in the world as it exists. I might focus on a somewhat obscure subculture, such as the world of extreme Christian patriarchy in Virtuous Women, but I built that world through research, not imagination.

Through my experience DM-ing, I’ve found that I love worldbuilding. I plan to convert some of my lore and histories into short stories, some of which I may publish on this blog and some of which I’ll submit to magazines. Maybe someday I’ll write a full-length fantasy adventure novel based in my D&D world, but that’s something much farther down the line.

In the meantime, I have my work cut out for me. Of my group of ten players last term, seven of them are returning in the spring. Two brand new players have also registered, along with a nominally experienced player new to our coop day. Fortunately, one of my returning players is ready to try her hand at being Dungeon Master, so I’ll be able to split into two groups. However, my own kids are now going to be attending two days, not one, and I’ve been asked to run a group on our second day, as well. There are already six people registered for that group, with more likely. And three of those six also attend the first day, so I can’t just reuse the same adventure.

I have begun work on a new novel in the Women’s Fiction genre, but I don’t see me spending a lot of time on that right now. But that’s OK. It’s not the D&D inspired writing project I’d envisioned, but I’m definitely honing my craft by running these groups.

And I’m having a hell of a lot of fun in the process!

Revolutionary Mothers: Women in the Struggle for America's Independence
by Carol Berkin
This book gives tantalizing glimpses into the lives of women from all walks of life who showed tremendous courage and fortitude in the most difficult of situations. The narrative of the Revolutionary War is so familiar, yet this book rev...

Mistress of the Solstice
by Anna Kashina

Have you checked out my book yet?